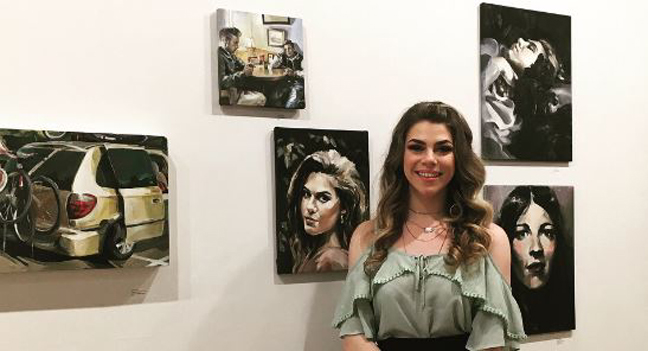 Halie Smith '18 is earning her Master of Fine Art in painting at MassArt in Boston.

Halie Smith ’18 of Spencer, Mass., has realized her goal by accomplishing something only a select few have achieved – admittance to MassArt’s highly selective graduate program, where she is earning her Master of Fine Art in painting.

“MassArt’s graduate program is really, really small,” Smith explains. “There are only about 30 who are admitted to the program, and first preference is given to those who earned their undergraduate degrees there.”

Smith’s indisputable talent and unique experiences at MCLA captured MassArt’s attention. She attributes her success to the personal education she received at the College. “MCLA was awesome,” Smith says.

It wasn’t until she arrived at MCLA that Smith determined she needed to focus her efforts on a single medium so she might perfect it. “That’s when I started oil painting. It was really frustrating at first, but it was definitely something I wanted to use as an outlet for my expression,” she explains. What’s more, “I don’t think I would have had the opportunities I’ve had at other schools. My mentors got to know me and gave me what I needed.”

In addition to working closely with art professor Greg Scheckler to perfect her painting technique, Melanie Mowinski, associate professor of art, also played a key role. Upon learning that Smith wanted to paint for her life’s work, Mowinski arranged for her to intern with a world-renowned artist, who just happens to live and work in the Berkshires.

Thus began Smith’s internship with famous landscape artist Stephen Hannock, which spanned her entire senior year. “I made his canvases, did varnishing, and learned how to prep the canvas surface, which he taught me to do,” Smith recalls. “Working closely with Stephen let me know that I could be really loose with my painting. That’s what clicked. I love it. It’s second nature to me now.”

At MCLA, Smith not only had access to accomplished artists like Hannock – who painted an expansive mural in the College’s Feigenbaum Center for Science and Innovation – she also studied in close proximity to world-class art museums like the Clark Art Institute in Williamstown and MASS MoCA in downtown North Adams, which she visited “whenever I wanted, for free, which is huge.”

With her May graduation and departure from MCLA, Smith left behind a series of artworks – on campus, in North Adams, and elsewhere in the Berkshires. For several years, the Berkshire Art Association featured her work in its annual shows. Last year, three of Smith’s sculptures were purchased the first night of the exhibition. Visitors to the North Adams Public Library now enjoy a tranquil garden painting that hangs in its youth section, as Smith was commissioned to create the work in memory of a longtime library supporter.

And, at MCLA, Smith designed the vibrant art mural located just off the campus quadrangle, near the stairs that lead up to the Campus Center’s entrance. A capstone project of Kaitlin Short ’17 and Kayla LaVoice ’17, Smith created the plans for the wall painting from the concepts they requested. She also painted a sweeping mural of North Adams, which adorns a wall in the English/communications lounge in Mark Hopkins Hall.

Now a proud graduate of the College, Smith also leaves behind a strong system of advocates at MCLA as she heads to MassArt.  As a result, “I can take this risk and to go Boston,” she explains. “I know I’ll be able to email my professors for advice. This school gave me such great support for what I want to do.”