Building a Spanish Newscastthen Going Abroad to Improve it 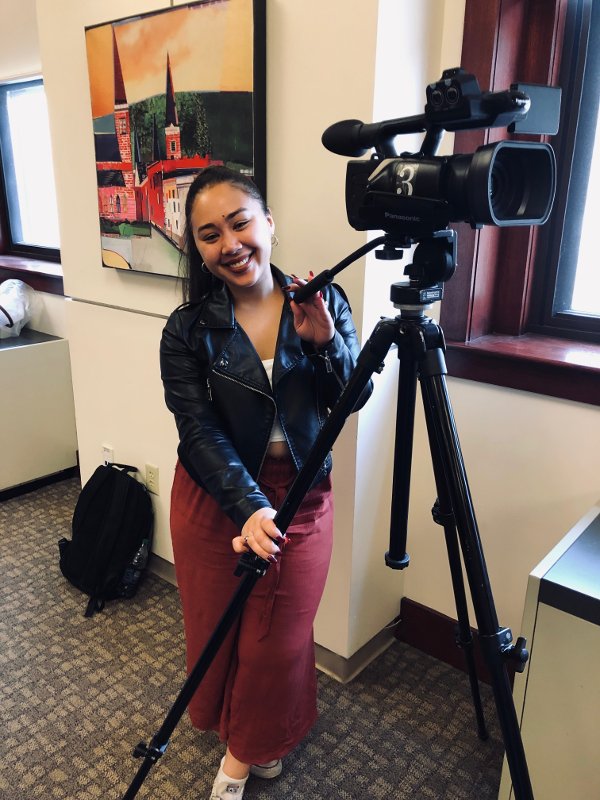 Karen Canela '20 setting up to cover a story for Beacon Web News (BWN), the college's weekly newscast. Canela, who is graduating a year early, spent a semester in Spain perfecting her Spanish to improve BWN's Spanish-language program.

Don’t be surprised if you see Karen Canela ’19 reporting live from New York sometime soon. A native Spanish/English speaker who discovered her love of journalism at MCLA, Canela has spent the past three years using her skills to create community and enhance perspective on campus via Beacon Web News and Berkshire News Now.

She began with a Spanish edition of Beacon Web News, the College’s weekly newscast, produced and reported by students. As that project grew and evolved, Canela wanted to refine her skills—and sought out an opportunity to study abroad in Spain in order to do so. Working a summer job reporting for Berkshire News Now (BNN), she saved her money and was awarded a small scholarship to help cover the trip.

At BNN, “I made my entire show,” producing, reporting, and editing pieces to air on local news, she said. “That can be really tiring, especially with a two-week turnaround. But I wasn’t tired at all. I realized I love editing. I love talking to people in the community. I don’t have to come up with stories. Stories are already there. My job is to tell them.”

“There are a variety of students coming to MCLA,” she said. “In the media, now, if you don’t see someone who talks like you or looks like you, you’re going to feel left out. I definitely wanted the Spanish community to have that voice.”

Though she grew up speaking Spanish and English and was fluent before arriving in Spain, “Our dialects are way different,” Canela said. “My Dominican Spanish is a dialect of our own place. There were words I’d say no one in Spain would understand, and Spanish words in Spain I didn’t understand.”

As she translates, Canela sometimes writes a sentence in English first, tries to translate it directly, and realizes it won’t work. “I have to find a balance sometimes because the storytelling is so different,” she said. “I try to be very well-rounded in it. When I watch Spanish news segments, I notice the way they tell the stories is very different, and the way they talk to the audience is very different.”

Recently, Canela had the opportunity to tape a College Roundtable interview with Hardman Journalist-in-Residence Mariel Fiori, the co-founder and managing editor of the Bard-sponsored La Voz, cultura y noticias hispanas del Valle de Hudson, who visited campus in March. They conducted the interview entirely in Spanish.

While she is currently applying to reporter jobs at New York City news stations, Canela ultimately hopes to be a news anchor for a major news program—but she wants to put in a few years of work in the field first. “The more you’re out in the field engaging in these stories, the better journalist you are. That’s something BWN does,” she said. “If I were at another school, I don’t think I’d have had this experience. We’re forced to go out into the field. We’re forced to think about the stories we’re going to create. …Journalists are what keeps information flowing. We are the responsible people, making sure other people are aware. I love that.”