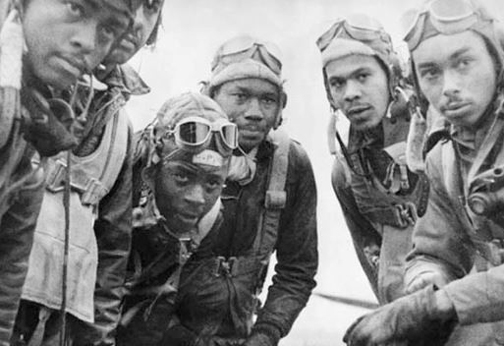 Above, a few of the Tuskegee Airmen. Below, Bruce W. Bird ’85 at the museum he founded. 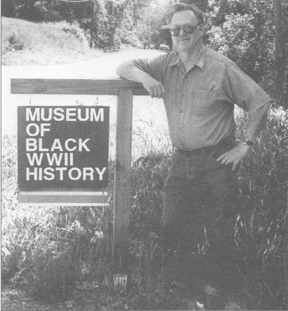 According to history alumnus Bruce W. Bird ’85, it was the success of African Americans in World War II that first started to turn the tide of racism in the United States. His expertise lies in military history and, in particular, World War II. However, the 1.2 million African-American troops who fought in that war hold a special interest for Bird.

They did their part, and they deserve to be recognized,” Bird said. So, he decided to create a museum. A collector of military memorabilia for the past 60 years, his collection includes an assortment of military firearms, hundreds of vintage artillery rounds, military models, nearly 1,000 research books, as well as Army, Navy, and Air Force uniforms.

The founder and curator of the Museum of Black WWII History in Pownal, Vt., Bird now is retired and living in Stamford, Conn., where he is working to reopen his museum. He frequently speaks to various groups about African Americans in WWII, and brings along displays of artifacts to exhibit at the presentations.

“I started getting interested in military history when I learned how to read,” he said. “And before I was a teenager, I had begun to collect various war memorabilia.” But it wasn’t until Bird was 37 that he attended the former North Adams State College – now MCLA – where he enjoyed studying history.

According to Bird, the College nourished and encouraged his love for and knowledge of WWII history, including the contributions of African Americans during the conflict. “I found the instruction to be good, and the professors were interesting,” he said.

Contributions by African Americans in WWII, Bird said, led to President Harry Truman’s decision to desegregate the military in 1948, as racist stereotypes were proven false. Bird explained, “It took until 1954 to actually get the job done, but it got started in that direction. The military was desegregated before everybody else was.”

It was Eleanor Roosevelt, Bird said, who insisted that the military allow African Americans to become fighter pilots. Formed in 1941, the 332nd Fighter Group was perhaps best known as the Red Tails. Also called the Tuskegee Airmen, these fighter pilots flew alongside America’s bombers as they performed their missions, to protect them from the Germans.

The Red Tails were second to none. “The bombers were much better protected by them than anyone else,” Bird said. “They flew a mission to Berlin that was 1,600 miles long. It was the longest escort mission flown in the war. I actually spoke with one of the bomber crewmen, and he said the people were delighted to see the Red Tails defending them.”

Another African-American military unit of distinction was the 761st Battalion, an independent tank battalion that consisted primarily of African-American soldiers. Known as the Black Panthers, they were called “one of the most effective tank battalions in World War II.” Many individuals who were members of this unit received medals, including one Medal of Honor, 11 Silver Stars, and approximately 300 Purple Hearts.

For more information about Bird’s Black WWII History Museum and opportunities to hear him lecture, go to www.blackww2museum.org.